The journey of watching ourselves set sail is a spiritual journey inside of our mind and action of arts, the idea is not limited within one country, but actually international, maybe I should say, Universal, which means, to hold the space and time together, no matter if we talk about the Classical or Contemporary arts, it is the same.

Here, we have such an artistic sailor, Carles Castel who sailed from Spanish/Catalonian tradition via the U.K. and Japan to Berlin, and is showing his wonderful art. Carles’s journey somehow could be seen as sailing from the west to the east.

From distance, Carles’s paintings look very gentle, sensitive, soft, even a bit feminized because of the way he uses the colours, especially, the oil colours have been controlled so well, thus all different layers joined together and create a kind of “Misty” feeling that often seen in Classical Chinese paintings (even poetry too). But, this is only the first feeling we gain from his works, if one walked from the distance to be closer to the paintings and gazed at a point or a small area with their eyes, and then suddenly, you will recognise how powerfully the colours have been used, and how many layers have been put together, it is not too much even to call it “a storm”! the most interesting point is, how to create the storm and then keep it silently sweeping? Shacking us inside of our hearts and minds, thus last for a much longer time? It is a very high skill, but I rather like to say, a much higher understanding of arts, let’s put in the best word – A Poetic Art!

Carles came from Barcelona where the roots of so many great artists like Picasso, Dali, Miro, Tapies and many others, but a “Living Tradition” means not look at the past only, but endlessly create its now! Carles represent this energy of Contemporary Spanish/Catalonian Arts tradition by bringing much wilder sources together into his works, this is the proofs of his ability, as well as linked with the brand new contexts of the globalisation. Carles is truly a Contemporary international artist!

Finally, Carles brought his roots inside of himself, together with the energy of creating the new period of it, came to Berlin where he is exhibiting his spiritual journey. Berlin is the best place of meeting and a great stage to let different cultures perform themselves thus one can enjoy each other and share the energy together. Using poetry as an image again, the sentence I found in Berlin is still functioning – Poetry is Our Unique Mother Tongue!

carles castel’s large-sized oil paintings invite the beholder to dwell. as if guiding by means of invisible magic, they continuously seduce the viewer to look ever closer. the warm, often rapidly, dynamically and thickly applied colour shades are assembled to form atmospheric colour islands which communicate tenderly with each other.

such harmonically arranged colour palettes convey the notion of unknown and mysterious landscape visions. these pictures show sentimental landscapes, formed in the act of painting in the mind’s eye of the artist. the colour choice is mainly based on bright, clear hues, with predominating shades of brown, green and blue. by applying these colours primarily in a horizontal brush progression, the artist conveys a connection between groundedness and dream vision. 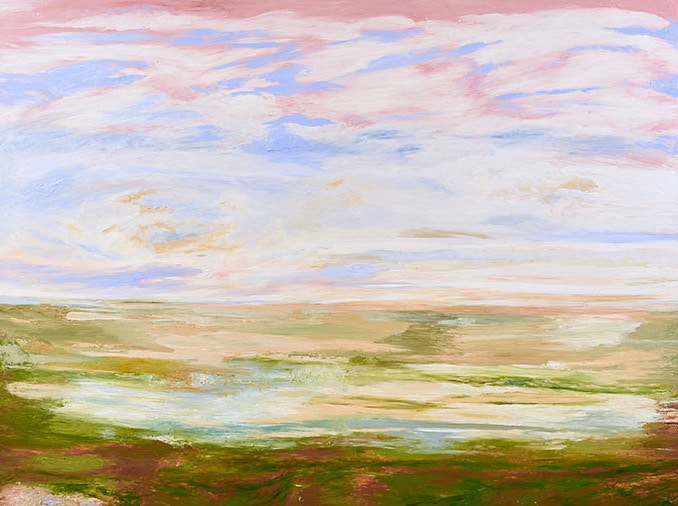 building on each other, two shades prevail: a warm, bright ochre and soft blue, creating the illusion of glistening horizons, wedded to the sky. one of carles castel’s major strengths lies in the poetic modelling of infinite wideness. absorbed by some of his landscapes, one immediately recalls goethe’s description of a mirage in his diwan: „and blue, past wilds we flee / stretched the illusive sea“.

lightly, his landscapes convey the conception of an atmospheric, sheer unfathomable wideness, where the earth aspires to infinity and unites, by means of subtle colour choice, with the sky. these iterative, frequently thickly applied colour palettes give his pictures a visual strength, aspiring to unity and connectivity over and over again. 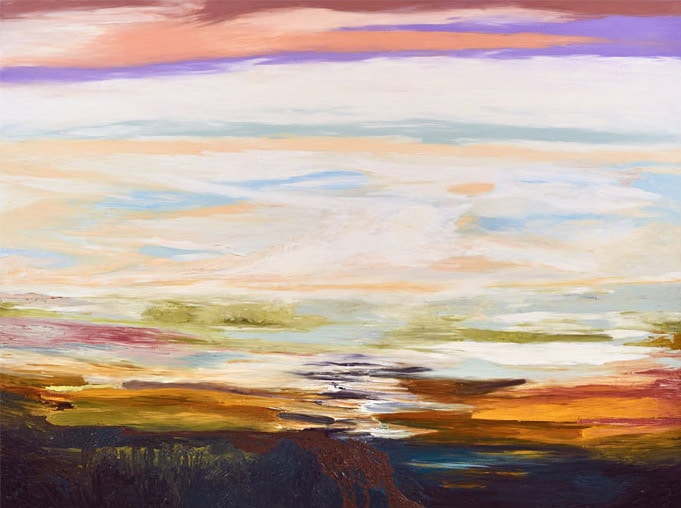 by these means, carles castel’s landscapes inimitably broach the tensions between wideness and vicinity, the comprehensible and the incomprehensible, and this world and the other world. at the same time, the pictures convey the desire of the artist to dissolve and reconcile these tensions in pictorial harmony.

a native of barcelona, the content choice for the picture was inspired by the ever present view of the sea in his hometown, which accompanied and shaped his cravings ever since his early life. like the glistening light dispersing softly on the sea of his memories, his brush style formulates intensive, floating and at the same time ever harmonic colour landscapes. 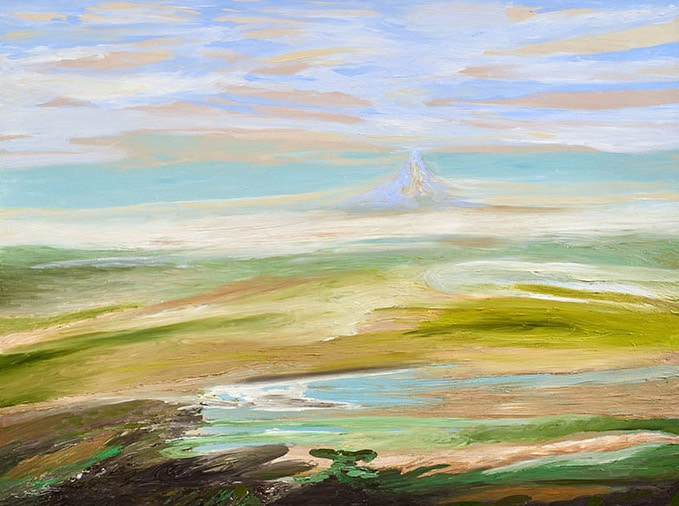 altogether, the true refinement of his pictures lies in a particular, individual combination of painting styles, originating both from abstract and impressionistic conceptions. without perceivable border lines, loosely washed colour islands are set against and next to coursely brushed ones , thus creating the impression of naturalistic, yet unknown atmospheres.

altogether, the true refinement of his pictures lies in a particular, individual combination of painting styles, originating both from abstract and impressionistic conceptions. without perceivable border lines, loosely washed colour islands are set against and next to coursely brushed ones , thus creating the impression of naturalistic, yet unknown atmospheres. 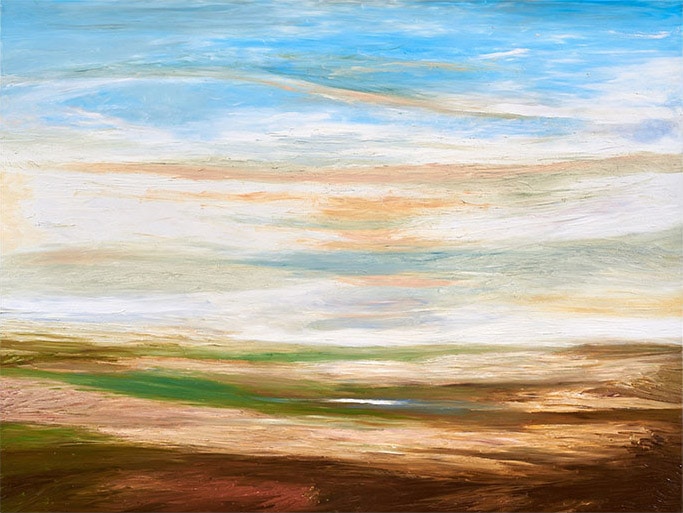 A further key area of Carles Castel’s work are his fascinating siluetas. The silhouettes are created consistently in a mixed technique of ink and watercolour on watercolour paper. The works all show the contour of one or two silhouettes which dominate the image in its centre. On first sight, they recall the art of papercut silhouette portraiture which was widely popular in 18th-century Germany. These paper silhouettes were then collected and exchanged as a token of friendship and connectivity. 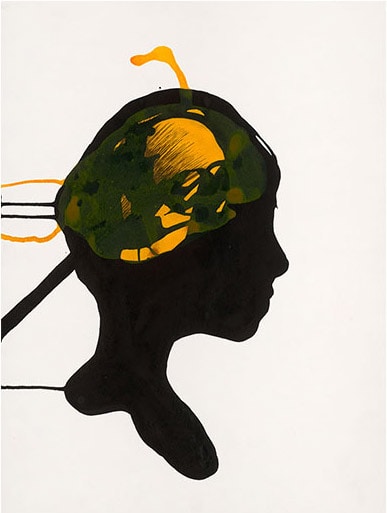 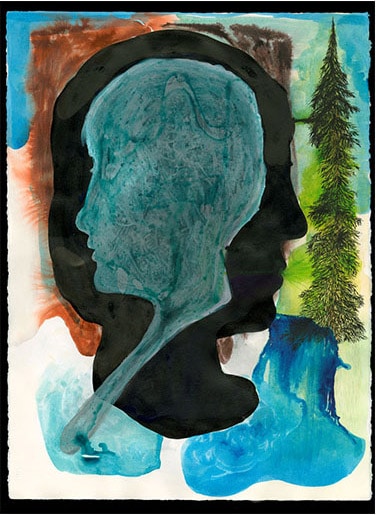 At first sight, in painting his silhouettes in dark ink, the artist seems to have aimed directly at evocating this tradition. However, in contrast to the paper silhouettes of the 18th century, Castel’s siluetas were not created from an individual model. Rather, they arose in the artist’s fantasy and thus appear as a shadow of his imagination.

In his formal language, which includes the use of abstract elements, Carles Castel interprets his heads as the centre of real and unreal world perceptions. By contrast to this idea, his profiles are open for permeating light which serves as the source for abstract shapes. In this way, the painted heads, in their seeming perspicacity, leave the realm of everyday experience. Here, the sophisticated colouring should be interpreted as another hint at the artistic inspiration of the artist.

All silhouettes show a high degree of concentration and self-contained absorption. Like sculpted busts, they document a shadow-like presence in the pictorial spaces created for them. Here, in a most sophisticated manner, the painter interprets the space around the centralised silhouettes in a horizontal and a vertical reading.

With abstract, net-like arranged ribbons of colour and colourful enclosures of light, Castel bestows on the heads a stabilising and at the same time invigorating framing. The light, beaming in golden-yellow, comes mostly from behind the heads and serves as a forceful contrast to the head which dominates the centre. 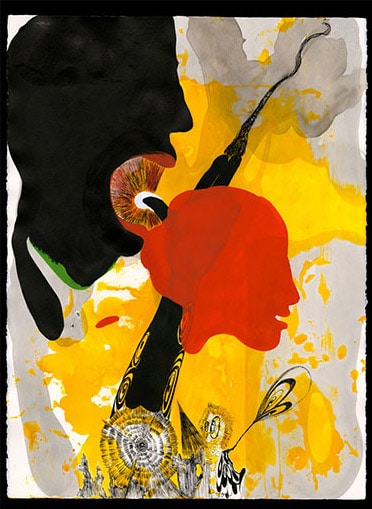 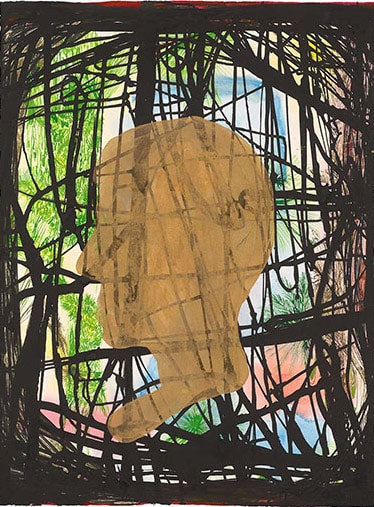 In addition, the artist supplements the silhouettes with elements of nature, drawn in fine, horizontal hatchings. Colourful lights and forms of expression recall lakes, waterfalls, landscapes and trees. While these references to nature can have a soothing and harmonising effect on the spectator,at timesthey also appear to be frightening and nightmarish. They serve as a mirror to the soul sensations and desires of the pictured figure. For example, firm green conifers with strong tree trunks could suggest stability, but the depiction of the branches, arranged tightly and narrowly before and against each other could represent a prison for the white silueta in front of them. The only hope here is the permeating light.

At the same time, the fine, thin drawings of small, humorous creatures or helical sun fabrics grant the pictures an unexpected ease.

The double portraits are of special, awe-inspiring tension. Here, the artist depicts closely positioned silhouettes which are highly differentiated in colour. By placing the figures next or on top of each other, and by showing them as growing out of each other, the painter explores different types of close relationship between two human beings. 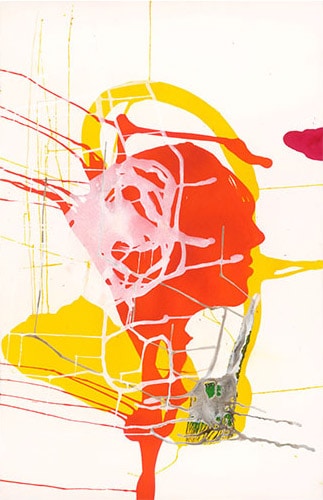 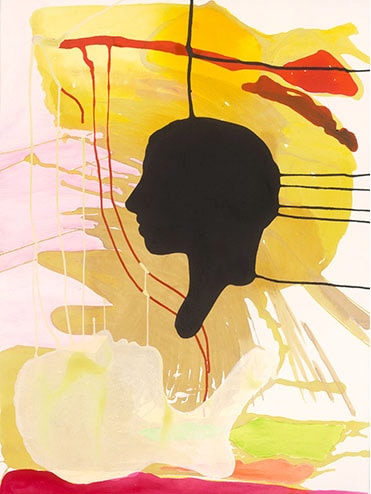 By often positioning both faces as looking out of the picture, the artist prohibits any dialogues between the faces. Carles Castel thus broaches the issue of solitude and of solitude in togetherness which is ever present in our society. His newest silhouettes aspire to the breakup of spaces and forms, pushing towards bright abstraction.

Now, nets of colour are imposed over the silhouettes which are henceforth only hinted at schematically. Thin colour gradients superimposed on the silhouettes in all directions, seemingly spilling out of them, grant the pictures new, sophisticated sensations of space, arriving at a new affirmation of the three-dimensional. Additionally, Carles Castel has started to experiment with new image supports, thus opening new dimensions for his future oeuvre.